Ben is a periodontist who serves San Antonio and surrounding areas 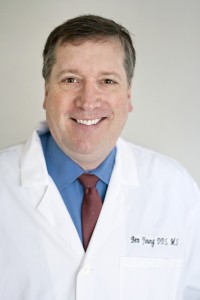 Dr. Young was accepted to dental school without obtaining an undergraduate degree. Had he stayed long enough to earn his degree, it would have been in English.  He was commissioned a second lieutenant in USAF his freshman year in dental school (1977).

The Air Force paid his way through dental school under the Health Professions Scholarship Program, and he graduated from Loma Linda University School of Dentistry in Loma Linda, California in 1980. He was senior class president.

Dr. Young speaks nationally and is a member of numerous organizations to include the American Dental Association and the American Academy of Periodontology.