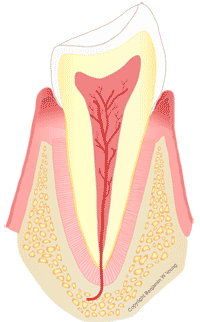 Patients Need to Know the Difference between Periodontal Disease and Gingivitis

This is more than an academic question to those with gum problems. If you know the difference, you can better manage your own health and better control the cost of dental care.
Both Periodontal Disease (also called “Periodontitis) and Gingivitis have similar signs and symptoms to the patients themselves. Both of them cause the gums to swell and bleed. At times, however, both are undetectable by the individual, which results in many people mistakenly believing they are doing just fine. (Hint: if you have not seen a dentist in the past three years, you are pushing your luck).

The difference between the two conditions requires a simple test all dentists or dental hygienists routinely perform as a part of a routine dental examination. A small measuring probe is placed between the gum and the tooth. Using just the weight of the probe itself, it is guided to depth. If the pocket measures 3 millimeters or less and does not bleed, it is considered healthy. If the end of the probe is within a millimeter of where the enamel of the tooth meets the root, then no bone loss has occurred. If the gums bleed in this case, then it is gingivitis. If the pocket is greater than 3 millimeters then the cause is likely gum swelling or overgrowth instead of periodontitis.

People with a history of periodontal disease and treatment should have frequent probing measurements in order to detect any areas where breakdown may be occurring.